Figure 2 shows that the largest particles are reduced after 30’ of milling. Beyond this time the average particle size remains the same, only the size distribution is decreased.​

When applying a transparent coating or inkjet ink there might be a need to visualize the coating in order to determine its presence on the substrate. A fluorescent additive allows the coating to become visible under a UV-black light. This additive must however not impair the transparency of the coating. There are 2 possibilities of instilling fluorescence in a coating: the addition of a fluorescent dye or a fluorescent pigment. In this case study, we shall focus on the fluorescent pigments. In order to keep the coating transparent, the fluorescent particles must be reduced in size. This size reduction can be accomplished by milling the particles in a pearl mill. During the milling, samples were taken at regular intervals in order to evaluate the dispersion quality. The samples were evaluated using fluorescent spectroscopy and particle size analysis.

A blue organic fluorescent additive was milled in water in a bead mill (Dynomill). The particle size of the dispersed particles was obtained using a Malvern Particle sizer (See Figure 1).​

At first glance we assumed that the additive was totally destroyed in the pearl mill. Thin layer chromatography (TLC) however demonstrated the creation of a contaminant during the milling process (see Figure 3 right top corner). At time zero 1 main component is visible, while after progressive milling 2 extra components appear. Care must therefore be taken when milling this particular additive: milling for too long at too high shear and impact forces (pearl mill) promotes the formation of new species that absorb all the incoming light, thus leaving none for the original fluorescent additive. 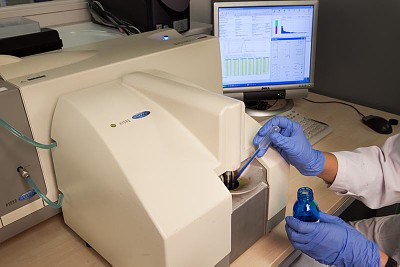 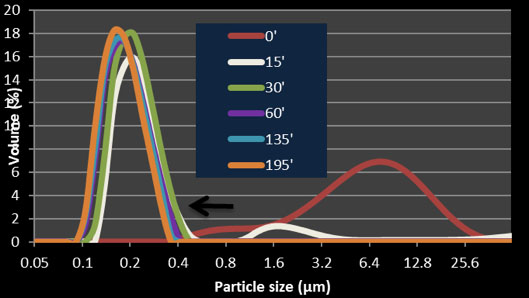 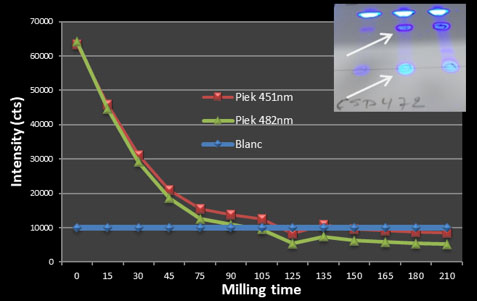