Red 7 is a pigment commonly used in cosmetics and drugs and is virtually insoluble in water. Its chemical structure is shown in Figure 1. It usually produces a very stable and intense color and needs therefore only to be added in small quantities to the formulation.

When Red7 was incorporated into certain matrices a color shift was observed after some time. The color of the formulations shifted from red to orange. Careful examination into the chemical composition of these matrices revealed the presence of phosphoric acid (H3PO4). It was hypothesized that this phosphoric acid could react with the Red7 pigment which uses a Ca-ion to balance the negative charges in the molecule. Over time this can cause a complexation of the Red7 pigment with phosphoric acid leading to a shift in the emission spectrum of the pigment.

In order to confirm this hypothesis accelerated ageing tests were performed of this Red7 pigment in matrices with and without phosphoric acid whilst monitoring their absorption spectra. Accelerated ageing tests were performed by storing the samples in an oven at 80°C for several days. Figure 2 shows the UV/VIS spectra of the different matrices containing the Red7 pigment. The ageing of the samples was accelerated by storing them at 80°C for several days. The graph in Figure 2 clearly shows the absorption shift towards lower wavelengths after accelerated ageing tests. It also shows that the color shift does not occur immediately after adding H3PO4 to the matrix (spectrum 2), but it requires some time to become visible (spectra 3 and 4). 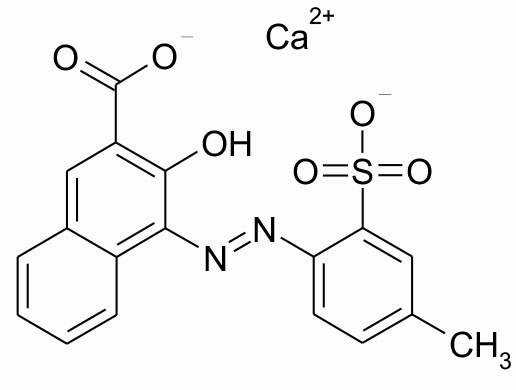 Figure 2:UV/VIS absorption spectra of the different matrices containing the Red7 pigment after accelerated ageing tests. The absorption of the formulations is plotted against the wavelength. A clear shift is visible in the spectra of the aged samples (spectra not scaled).​ 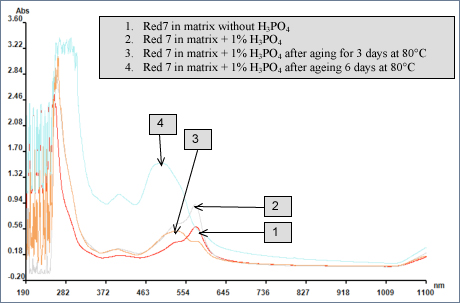